This week we saw the arrival of the Walking Dead Construction Brick series. These building brick sets and figures are compatible with other leading brand bricks and are highly detailed, they are sure to capture the imagination of fans of the AMC’s zombie apocalypse series.

Lego’s Star Wars series has become highly collectable for all ages and will see you paying in excess of £200 for an R2D2, Death Star or Ewok Village. It appears that certain building brick items are purely for the adult population now and McFarlane are obviously looking to get a piece of the action with this range.

Although the sets either state 10 or 12 years of age on the box the television series is certainly for an age higher than that, so please take caution when picking these up for a grandchild or nephew.

The first launch includes Blind Bags, Figure Pack, Daryl Dixon and Chopper or Prison Tower and Gate. Blind bags contain either Walkers or Humans and are marked in the corner of the bag, there are four of each to collect. The Figure pack allows you to build 5 figures and then you have the Daryl and Chopper set which contains 154 pieces and the Prison Tower has 620 pieces and is the highest price point in the range. 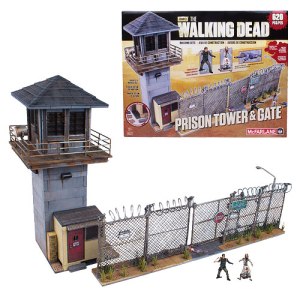 As usual this week their have been many sad news stories and articles that make you worry about your own safety when you leave the house. On a more positive note I would like to draw your attention to a short video called the Pegasus Project in which a young dog was saved and with love and care has flourished despite being given a very poor prognosis when only a pup. It is a reminder that positivity, love and support can be the key to success and each of us should strive for this every day. Check out the video Pegasus Project